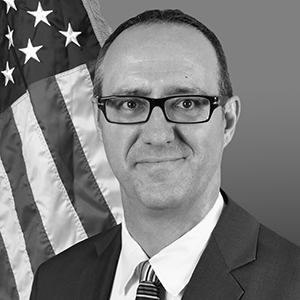 David J. Gainer arrived in Perth as U.S. Consul General in August, 2019. He has focused on Australia twice in his career already—first as the Visas Chief at the U.S. Consulate in Melbourne, and more recently as the Deputy Director of the State Department’s Office of Australia, New Zealand, and Pacific Island Affairs.

David began his career as a U.S. Foreign Service Officer in 2003 in Phnom Penh, Cambodia as Assistant, and then Acting, Public Affairs Officer. He subsequently led Public Affairs endeavors at the U.S. Consulate in Chennai, India and the U.S. Embassies in Prague, Czech Republic and Ankara, Turkey, where he was Spokesperson.

Prior to joining the Foreign Service, David taught budget and appropriation classes for the U.S. Department of Treasury. He earned Master’s degrees in American history, African history, and Liberal Studies from the University of Maryland, University of Cape Town, and Georgetown University, respectively, and holds a B.A. in history from Xavier University in Cincinnati, OH. He taught secondary school as a Peace Corps volunteer in Malawi. David has also worked as a disc jockey, hosting weekly music shows on a variety of radio stations, and he speaks Turkish, Czech, Khmer, Chichewa and Xhosa. David is married to Jessica, an art historian and yoga instructor, and they have two daughters.