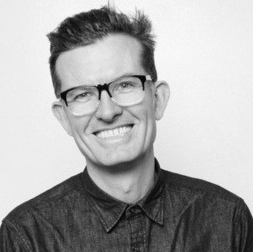 He is responsible for not only the growth of Tricky Jigsaw but has overseen the Digital, Social and Innovation capabilities at M&C Saatchi across the group's ten businesses. In 2017 he was personally recognised amongst the top 20 creatives in the country via the Adnews Creativity List.

In May 2014, M&C launched the world-first shark detection system 'Clever Buoy'. The project went on to win international innovation accolades including seven Cannes Lions and the coveted Titanium; SXSW, SPIKES Grand Prix, IAB MIXX Gold 'Can't be Contained' category, WARC Grand Prix and D&AD White Pencil. The Buoy, most importantly, has been backed in a $16m shark mitigation pledge from the NSW government and is now listed on the ASX (SM8).

Prior to joining M&C Saatchi in 2014, Ben was Head of Digital for The Monkeys. He is equal parts strategist, creative and technologist and, with 20 years experience across London, Zurich and Sydney, he is regarded internationally as a forward thinker in this space. He is inspired by what is achievable with passionate, curious people unbound by convention.