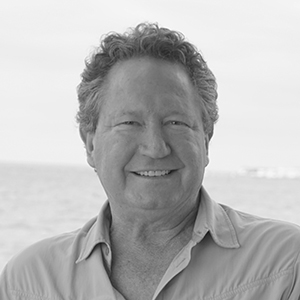 Andrew’s background in business, technology, humanities and philanthropy, led him to launch the Global Slavery Index in 2013, to combat the scourge of modern forced labour. He also has deep engagement in artificial intelligence in terms of the opportunities and risks it presents to modern society. Deep family roots on the Pilbara coastline gave Andrew an early appreciation of the ocean coupled with knowledge of industrialisation, and it's out of sight out of mind vulnerability.  This led Andrew to complete a PhD in marine ecology in 2019, allowing him to bring his corporate and technological backgrounds to bear.

Highlights from Andrew’s research include:

Australia has established a network of blue-water marine parks throughout its EEZ, including along the WA coast. By understanding spatial and temporal variability in the context of large scale biogeography and the status of these newly created marine parks, Andrew’s research also provides a key baseline for ongoing assessment of the effectiveness of existing protection, discovering that the biggest impact over 23 degrees of latitude on wildlife is the human footprint.

Mass automation of ocean research: Andrew is exploring the latest technology that could be applied to an automated ocean measurement vessel that will exponentially accelerate the acquisition and compilation of wildlife and oceanic data.

Stopping all plastic waste in our oceans: Andrew has commenced a global initiation to have the marketplace worldwide, and petrochemical companies in particular, halt waste plastic pollution and keep it in the economy and out of the environment through an industry led voluntary contribution.

This research matters because pelagic vertebrates are amongst the most threatened yet least understood animals in our oceans, with many of these species also critical to the balance and trophic scale of wildlife, and  global food security.